‘Hag sameah’ to all my Jewish relatives and friends.
A belated Hannuka hag sameah to you too, I’ve been busy, I’ve been ill [almost shipshape now] or I’d have sent you my ‘hag sameah’ sooner. 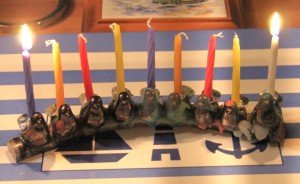 To my non Jewish friends, ‘shalom’, peace, and if of interest, a brief [by Jewish standards… ] explanation of ‘Channukah’.

The story behind the festival is inspirational, one of a successful struggle against seemingly impossible odds.

In English ‘Channukah’ is generally taken to mean in translation from the original Hebrew, ‘Festival of Lights’ although the actual Hebrew translation is word means “dedication”.

Channukah is regarded by Jewish people as a minor yet important festival.

Are you sitting comfortably? Yes? Then I’ll begin.. [hands up who remembers that phrase…?]

It is one of those rare tales from history that stands beside other heroic struggles against impossible odds, the battle of Thermopylae, the Battle of Britain.

A story of a relatively small people who united, who successfully freed themselves from a seemingly overwhelming oppressor for their liberty and so changed history.

For my friends unfamiliar with this minor yet much loved festival.

Channukah, Chanukah, variously spelt in English including the more phonetic ‘Hanukkah’, this is a Jewish holiday the origin of which has nothing what ever to do with pagan winter festivals and pre dates Christmas.

However you spell ‘Channukah’ the reality behind the [Hebrew] word is a worthy story commemorating the re-dedication of the Second Temple.

How this came about is an inspirational tale.

In brief, during the second century BCE, the Land of Israel and Judea was ruled by the Seleucids (Syrian-Greeks descended from ).

Those people were pagans who tried to force the people of Israel to accept Greek culture and religious beliefs many of which were distinctly how shall we say, ‘pagan’, unjewish…

Starting small, rather like Paris this past week, people revolted against what was oppression.

Against all odds, led by Judah of the family Maccabee, this small people fought for their values, their freedom.

They won back control of their lands and lives from what was then one of the mightiest empires and most formidable armies at that time.

It was somewhat as if the Welsh or the Dutch took on the EU, Russia or America and won.

The Jewish people united, drove the Greeks from the land, reclaimed the Holy Temple on what today is called ‘Temple Mount’ in Jerusalem.

The Temple and mount were cleaned, rededicated as before to the service of G-d. 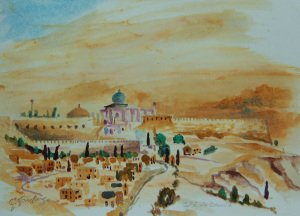 When the people sought to light the Temple’s Menorah (the seven-branched candelabrum), they found only a single cruse of olive oil, enough for one day, had escaped contamination by the Greeks.

In hope they lit the menorah.

We are told, miraculously that one-day supply of oil lasted for eight days, the time it took to make new oil under conditions of ritual purity.

To commemorate and publicise these miracles, the sages instituted the festival of Chanukah.

Today Temple mount remains forbidden to Jews for prayer, inevitably, there will be another miracle.

Scroll back to top